Newly Elected Board of Directors and Elected Nominating Committee

Congratulations to all those who were elected to the Board of Directors and Elected Nominating Committee with terms starting June 1, 2018! 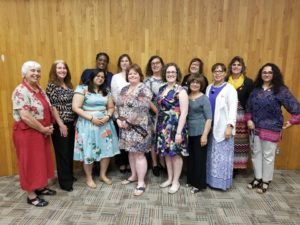 Pamela Carter: A current volunteer at SICM Food Pantry in Schenectady, the Editor for Miracle On Craig Street News, Vice Chair of the Women’s Ministry at Mt. Olivet Missionary Baptist Church in Schenectady, and a Muse for the Working Group on Girls at Central Park & Oneida Middle Schools, Pam is extremely engaged in her community. She is also a board member at Safe, Inc. She spent most of her career at the New York State Department of Public Service in Albany before she retired in 2016.

Aliya Saeed: Aliya is a licensed psychiatrist at Vanguard Medical of the Capital District providing outpatient private practice support for over 20 years. She is a member of the Group for Advancement of Psychiatry, the American Psychiatric Association, Deputy Legislative Representative of the Capital District branch for APA. She has been on the Ellis Hospital Medical Staff Credentialing Committee since 2005.

Judge Teneka Frost: Teneka is a city court judge in Schenectady, New York. She stresses the importance of diversity in government and its public officials, giving back to the community, and educating local children on the court system and services. She previously served as chief administrative law judge for the New York Department of State and was director of the Office of Administrative Hearings. She is a graduate of Syracuse University, Albany Law School, Class of 2002, and the Rockefeller College of Public Affairs and Policy at the University at Albany. During her professional career, she also worked as associate counsel and affirmative action officer at two state agencies, staff attorney for the Legal Aid Society of Northeastern New York, and associate attorney at Lemery Greisler.

Katherine Stephens: A results driven arts and education Director at Proctors Theater overseeing the School Program managing various budgets and marketing plans for the Theatre for Young Audiences Touring Program, Summer Stage Youth Drama Camp, Acting Out! Summer Camps, Acting Intensive Summer Camps, among other things. Katherine is also a City of Schenectady Board of Education board member and a New Leaders Council of the Capital District Board Member.

Nikita Hardy: Nikita has over seven years of extensive experience ranging from legislative relations, operations, program development, administration, research and policy analysis. She is also a member of the Junior League of Schenectady and Saratoga Counties. She has a passion for community service that has spanned her lifetime and looks forward to supporting the YWCA NENY’s mission efforts in our community.

Cathy Lewis: Cathy has been on the YWCA NENY Board of Directors since 1983. She has also been a Schenectady City School District board member since 2010. She served as board president from 2010-2017 and her current term runs from 2016-2019. Cathy is retired from General Electric, where she was most recently a senior tax manager. Her long-time support of the YWCA mission make her the most ideal advocate and ambassador for the YWCA NENY mission work in our community.

Rosemarie Perez Jaquith: Rosemarie is Director of Administration and Administrative Counsel to the New York Legislative Bill Drafting Commission. She is also a member of the Niskayuna Central School District Board of Education and is currently their Board President.

Denise Murphy McGraw: Denise was a recipient of the 2009 YWCA President’s Circle Award and received the 2011 Katherine S. Rozendaal Award. She is a partner at Hill, Gosdeck & McGraw, LLC, an Albany-based government relations firm. In addition, she is a member of the Niskayuna Town Board, co-leader of Girl Scout Troop 2383, a member of The 50 Group, and many other local not-for-profits. She has been a member of the Elected Nominating Committee for the YWCA multiple times over the past 15 years. She is very supportive of the YWCA’s mission and is committed to working on women’s issues.

Deneen Palmateer: Deneen is the Director of Philanthropy at Living Resource Corporation. She is a longtime member of the Schenectady Rotary Club, currently serving as Immediate Past President. She has supported the YWCA NENY during many of their events, most recently in coordinating their Silent Auction at the Women of Achievement Event 2018. Deneen is currently serving as Membership Director and has been a member of the Junior League of Schenectady and Saratoga Counties (JLSS) since 2003.

Julie Panke: Julie directs the Capital Community Voices, a 60-voice mixed chorus based in East Greenbush. She is a member of the American Choral Directors Association. Until recently, she was the Choir Director for the First Reformed Church in Schenectady for 17 years. Julie has also directed the Thursday Musical Club since 2003, and in 2015 was named a Woman of Achievement by the YWCA NENY.

Donna Tessitore: Donna is the Executive Director of the Faculty Student Association at Schenectady County Community College (SCCC) and since 1992 and has worked very closely with the YWCA’s Children’s Center that is located on the SCCC campus. She was also a YWCA NENY board member for multiple years. She currently sits on the Finance Committee of the YWCA NENY.

From the Board of Directors

Megan Haessig: Megan has been a science and social studies teacher in the Ballston Spa Central School District since 2000 and currently serving as the district’s K-5 Instructional Technology Coach. She has extensive volunteer and leadership experience in the Capital District. She is committed to empowering women and working on women’s issues. She has been a supporter of the YWCA, volunteering and attending events for many years.

Sharon Sudduth: Sharon moved to Schenectady in 2012 when her husband was named the new Executive Director of miSci. Since the move, she has embraced the community in which she lives. She has actively participated in voter registration drives because she believes that it is important for people to get out to vote for their representatives. The mission of the YW is very important to her and she looks forward to being a part of the Elected Nominating Committee.