Women Learning Together: A Train-the-Trainer Program About Domestic Violence in Guatemala

A few weeks before my first trip to Guatemala, in 2007, I was in a panic about having promised to lead a workshop on Domestic Violence with the women of Huitan, the village we had been invited to visit on that trip. So I did what most of us do these days when we want more information about something—I googled “Domestic Violence and Guatemala.” One of the articles that popped up was about two women, one from Guatemala, and one from the United States, who had met on an airplane in the US, and through that encounter had begun to provide programs on Domestic Violence for women throughout Central America. When they met that day, the Guatemalan Woman, Betty, spoke no English, and the woman from the US, Sandi, spoke no Spanish, but by the end of the flight, they had planned a visit that has led to a long and continuing ministry and friendship. As I read the article I thought what interesting and admirable women they were, and hoped to meet them some day. Last weekend, I had the honor and privilege and blessing of co-leading a workshop/training for Guatemalan women with both of them, Betty Cabrera of the Women’s Pastoral Program at a faith based social justice organization called CEDEPCA and Sandi Thompson-Royer, Presbyterian Church (USA) Mission Co-Worker who works with the Sinodica (Presbyterian Church wide Women’s Organization in Guatemala).

The seeds of the workshop were planted several months ago by Sandi, as she sent out e-mails to a variety of women, in both Guatemala and the States, inviting us all to consider assisting in the leadership of a “Train the Trainer” workshop, where we’d provide training for a few women from each of various presbyteries and communities throughout Guatemala, who then would go home with resources and knowledge to share with other women in their communities, about preventing Domestic Violence and responding to and helping victims of DV. Out of those invites, six of us have planned via Skype for a few months, and gathered together 3 days ago at Sandi’s home in Guatemala to begin planning in person. In addition to we three there is Sue, a retired mental health nurse from Portland, Oregon, who is in Guatemala for the second time, Mary, an entrepreneur of sorts from Colorado who came to Guatemala for a visit a few years ago, and never left, Juana, a leader from the Mam community, and Rubenia, a young woman who works with Living Waters for the World and is a very skilled (and patient) interpreter.

As often happens in Guatemala, there were problems along the road for the van that brought about half of the participants (who had begun travelling at about 6 am a 4-5 hour trip that took 9 hours), meaning we had to re-configure the schedule in order to make sure all participants got what was most significant. The women coming from the North arrived at about 3, looking beautiful and refreshed, not at all as if they had just been travelling for 9 (and some of them 14) hours. After they’d gotten lunch (and the rest of us had the requisite “refrescoes” (snack that’s more like another meal), we began as an entire gathered group.

We began our discussion by asking our sisters to share some things about what Domestic Violence is like in their communities. Not surprisingly, this description sounded very much like Domestic Violence in the states: jealousy, monitoring and limiting activity, controlling all the money, accusing the wife of cheating when in fact it is the man who is having an affair, forced sexual contact, and of course physical abuse in various forms. What is different in Guatemala is the lack of resources; there are 5 shelters in the entire country, and especially in the more remote locations, and even stronger societal belief that what happens in the home is no one else’s business, corrupt (and predominantly male) police forces, in tight knit communities where many are related, and where seeking help from the church is likely to result in urging to “keep the family together” and in the pastor taking the husbands side or going to him to urge him to treat his wife better, resulting in more beatings for her.

Because the church in Guatemala tends to be of a more fundamentalist/evangelical faith and to take the Bible literally, there was a strong focus on biblical passages. On the first day, I led a Bible study on Genesis 1:26-7—reminding us that all of us, women as well as men, are created in God’s image and carry the spark of that image for always. As it says on a T-shirt sold at CEDEPCA: “Violenzia contra mujer es violenzia contra el Imagio de Dios.” (Violence against women is violence against the image of God.)

On the morning of the second day, a leader from the Sinodica (nationwide church women’s group) led a devotional focused on the story of the Daughters of Zelophehad, a story from the Book of Numbers where 5 sisters whose father died without sons argue successfully that they should be able to inherit, lest their father’s name vanish from the community. It is a little known biblical passage of strong women advocating for their own rights, and the leader encouraged all to remember that it is part of our responsibility as the people of God to speak up on our own behalf and on behalf of our sisters, that God will hear.

Later in the day, I spoke about the challenging topics of divorce and forgiveness, borrowing heavily from Marie Fortune of Faith Trust institute, who long ago pointed out that when abuse happens in a marriage, the holy covenant of marriage is already broken, by the perpetrator of the abuse, so for the victim to seek separation or divorce is not to be the one breaking the covenant, but simply making visible what has already been done by the one who is violent. Regarding forgiveness, I again shared Rev. Fortune’s teaching that while forgiveness can be a valuable way of letting go and moving on for the victim, it cannot and should not be forced or insisted on. Even in the biblical texts that admonish us to forgive, repentance is part of the process, and true repentance means a change in behavior, not just remorse and apology followed by more violence. I shared the story I had once heard that when batterers were asked what to tell those who’d been victimized, they said, “Tell them not to forgive us too quickly. We need to be held accountable.” I also shared that sometimes when we cannot forgive, what we can do is let go and allow that to be between the abuser and God, rather than feeling responsible or compelled to forgive.

This led to a spirited discussion; some were happy to hear this new perspective, but skeptical—others vehemently shared stories of how they had forgiven their abusers and so should the others, some lamented that they wanted to forgive, but could not. Again, all of what was said was similar to what often happens in groups in the US, especially church groups, where forgiveness is such a strong obligation. I shared how much it breaks my heart when it seems that a victim of abuse feels that she is more at fault because she cannot forgive, than the abuser is for having abused her.

Finally a wise and respected woman stood up, and said, “I was very hurt by my ex-husband’s behavior, and, thanks to God, I have found that I can forgive him, but I cannot be in a relationship with him anymore, of any kind. He does not take responsibility for his actions, so I have to protect myself by staying away from him. Even when we forgive, we do not have to be in a relationship with the one who hurt us.” This led to a brief discussion of the differences between forgiveness and reconciliation, and that even when we forgive, we should not necessarily forget the abuse, lest we end up in a position to be harmed again.

Woven throughout our time together were short moments of experiencing and learning about different kinds of “self-care,” led by Mary Flammer. Soothing self-touch, ways of caring for our physical, mental, spiritual, and emotional selves, focused breathing were among the suggestions, which were appreciated and enjoyed by all.

Following a break, the participants spent time planning the workshops they will give in their community; the expectation is that over the next year, each group will give 4 workshops in their communities. Ideas that were generated included giving workshops at meetings that already occur (Women’s groups, craft or sewing groups, bible studies) and holding some individual meetings. Topics include Domestic Violence dynamics, Self care, bible reflections, mutual support among women.

On the last day, we came together to celebrate what we’d learned together, with presentation of certificates to all, including our youngest participant, a 3 year old girl who came with her Mom and was a delight to have around. Betty Carrera led us in this celebration, which ended with a moment of all holding hands and then lifting our hands together in joy.

I close with the words of the song we sang a number of times throughout the event, words written by Colleen Fulmer, whose spiritual and woman-affirming songs I have enjoyed for many years: 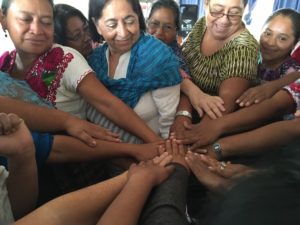 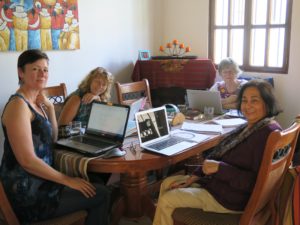 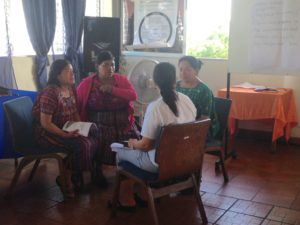 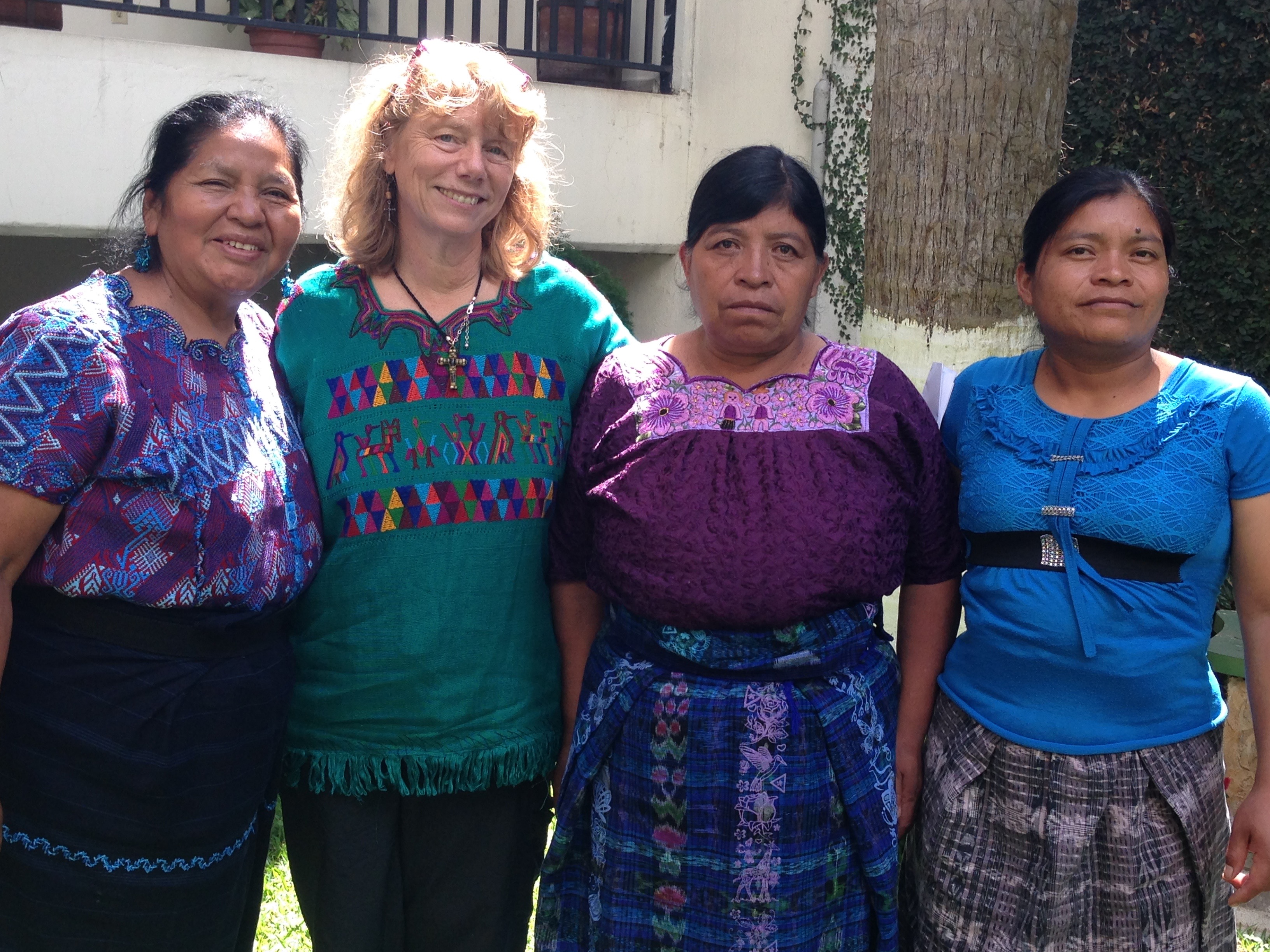 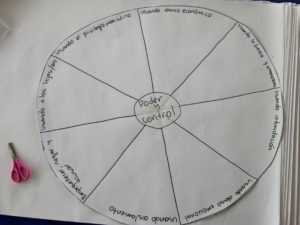 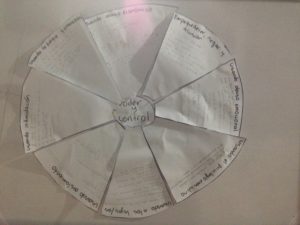